What is Upper cross syndrome?

Despite being named a syndrome, Upper cross syndrome is better described as a postural anomaly caused by muscle imbalances. For optimal movement and function to occur, our bodies require a balance of muscle length and strength between opposing muscles. In Upper cross syndrome, the neck flexors, as well as the rhomboids and lower traps, become stretched and weakened. When this happens muscles such as the sub-occipitals and upper traps as well as the chest muscles (pecs) start compensating and they become hypertonic (tight). The picture below is a demonstration of what happens in Upper cross syndrome. 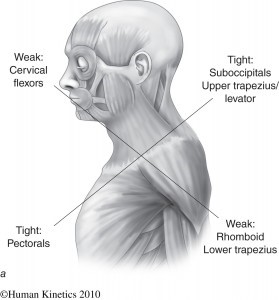 Due to these imbalances, posture changes occur, such as anterior head carriage and rounding of the shoulders, which places stress and force through the neck and mid back. Anterior head carriage is caused by flexion or bending of the lower cervical vertebrae while maintaining extension through the upper vertebrae. This increases the weight that the neck has to support and increases force through the joints and muscles around the cervical vertebrae. Furthermore, this also causes active myofascial trigger points of the suboccipital muscles which can cause headaches, neck pain and a reduction in neck mobility. Rounding of the shoulders can promote a kyphotic and stooped posture along with elevation, protraction and downwards rotation of the scapula.

Upper crossed syndrome is the result of a vicious cycle wherein a sedentary lifestyle, poor exercise technique, and/or imbalanced training. Upper cross syndrome is most commonly seen in individuals who spend long periods of time in the same position. An anterior head carriage (forward head posture), rounded shoulders and/or a kyphotic (hunched) thorax can eventually cause stiffness and pain in the muscles around the neck, chest and mid back leading to imbalances in the muscular pattern. Sitting at a desk during work or studying, long periods of driving and even long-term use of smartphones and electronic devices can have an effect on our posture. To prevent upper crossed Syndrome, it is important to take a break and move the back and neck during these times of prolonged postures. 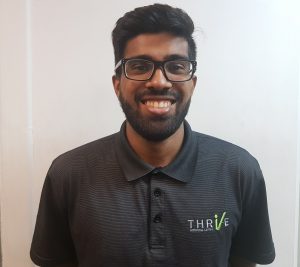 Visit our new location in Ascot | We have available for appointments 7.30 am to 7pm, Monday to Saturday.